Isaac Newton is responsible for the seven-color index, popularly know as ROY G BIV. Newton developed the seven-color system because he believed there was “harmony” in nature. Thus, he sought to align the number of hues in the observable light spectrum with the number of days of the week, notes on the major musical scale, and known planets in the solar system. Referring to the half notes of the major scale, Newton gave orange and indigo half the real estate of the other five hues on his color chart. In honor of this awkward moment in the development of Newton’s color theory, I produced a line of bowls in the seven Newton hues; red, orange, yellow, green, blue, indigo, and violet (first exhibited at ROY G BIV gallery in Columbus, OH). The orange and indigo bowls were half price compared to the other colors. I exhibit this work with a version of the Newton anecdote, his color chart (displayed above) along with a price break down for the bowls. 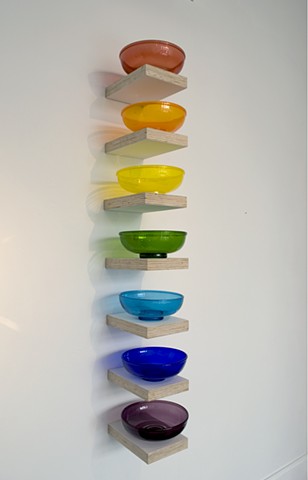